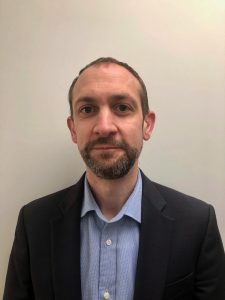 Alex studied Medicine at the Universities of Cambridge and then Oxford, graduating in 2001. He completed his oncology training in London, and during this time he also spent two and half years at the CyberKnife Centre, London, gaining clinical and research experience in radiosurgery (SRS) and stereotactic body radiotherapy (SABR). He was awarded a MD (Res) in 2013.

He has continued his interest in technical radiotherapy since becoming a consultant in 2013. He is the Addenbrooke’s lead for SABR and chair of the East of England SABR rollout committee. He is also a member of the GenesisCare national SABR Advisory Team. He has an interest in MR-guided radiotherapy and is part of the GenesisCare MR Linac team at the Bupa Cromwell Hospital, London.

Alex is the local Principal Investigator (PI) for clinical trials of SABR in prostate cancer and metastatic disease, and has been the local lead for several other radiotherapy and systemic therapy trials. He is a trustee of the British Uro-Oncology Group (BUG).